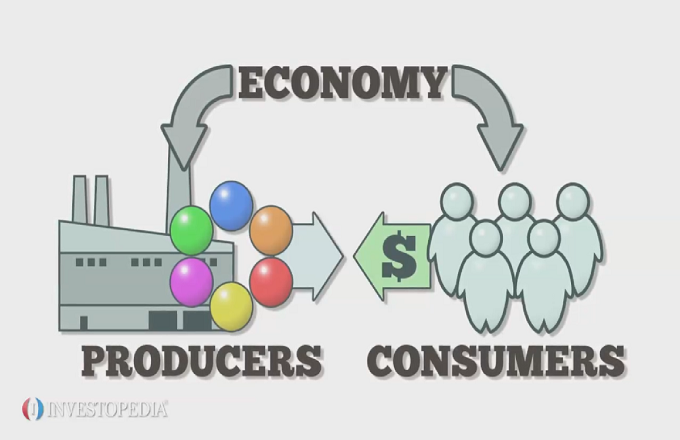 An economy consists of the economic system in a certain region, comprising the production, distribution or trade, and consumption of goods and services in that region or country. An economy is the total aggregate sum of all transactions of value between two agents, such as one individual to one other individual, or between groups of individual activity, such as in organizations to other organizations, and between one nation and another nation. Transactions only occur when both parties agree to the value, commonly expressed in some currency, or price. Then and only then is the sale of good or service acted on in the transaction. An economy represents the diverse activity of all agents engaged in the production of valuable goods and services for other agents in the economy.

In the past, economic activity was theorized to be bounded by natural resources, labor, and capital. This view ignores the value of technology (automation, accelerator of process, reduction of cost functions), and creativity (new products, services, processes, new markets, expands markets, diversification of markets, niche markets, increases revenue functions), especially that which produces intellectual property.

A given economy is the result of a set of processes that involves its culture, values, education, technological evolution, history, social organization, political structure and legal systems, as well as its geography, natural resource endowment, and ecology, as main factors. These factors give context, content, and set the conditions and parameters in which an economy functions. Some cultures create more productive economies and function better than others, creating higher value, or GDP.

A market-based economy is where goods and services are produced without obstruction or interference, and exchanged according to demand and supply between participants (economic agents) by barter or a medium of exchange with a credit or debit value accepted within the network, such as a unit of currency and at some free market or market clearing price. Capital and labor can move freely to any area of emerging shortage, signaled by rising price, and thus dynamically and automatically relieve any such threat. Market based economies require transparency on information, such as true prices, to work, and may include various kinds of immaterial production, such as affective labor that describes work carried out that is intended to produce or modify emotional experiences in people, but does not have a tangible, physical product as a result.

A command-based economy is where a central political agent commands what is produced and how it is sold and distributed. Shortages are common problems with a command-based economy, as there is no mechanism to manage the information (prices) about the systems natural supply and demand dynamics.