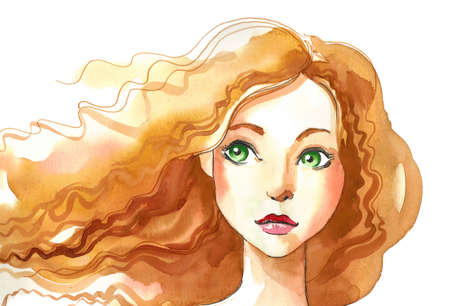 Many, many years ago there was a great magician, Poloza, who was known for as keeper of the Ural mountains' treasures. This magician had hundreds of guards who watched over all his gold, silver, and jewels he had. But living among such valuable possession, he treasured most of all his daughter the Golden Hair Girl, whom Poloza was guarding more than all his material riches.

Once upon a time Golden Hair met a handsome, nomad from the Bashkirian tribe, who was hunting nearby Poloza's Palace. They fell in love, decided to get married, and to go to live in the hunter's house.

However, Poloza was against letting his daughter live in the forest with the simple-folk Hunter-nomad and refused the marriage. Despite Poloza's refusal, the young Hunter decided to abduct Golden Hair. When he did so, the father twice returned his daughter back to the Palace using his magical powers.

The young hunter then went to seek advise from the magic wise owl, which lived deep in the forest. The owl explained to him that there was only one place where the magical powers of Poloza could not reach, and that was the large island, located in the middle of the Lake.

For the last time the young Hunter abducts the Golden Hair girl from her father's palace and takes her to the Island in the middle of the Lake. This time the magic powers of Poloza were unable to take the daughter away from the Hunter.

On this beautiful Island the couple found meadows and forests, herds of horses and sheep, wonderful gardens with flowers in bloom all year round, plenty of food, and all manners of comfort.

However, there was one condition that the magic wise owl told the hunter, and that was that both he and the Golden Hair girl were to be captives on this Island for eternity. Knowing this they still decided to live on this island.

Although, many centuries have passed, since these days even today the old folks living nearby the Lake say that sometimes at dawn, couples, walking along the bank of the Lake bank, can see the Island and the beautiful maiden sitting on a stone at the water's edge. She lets her hair down, and the water turns into pure gold.